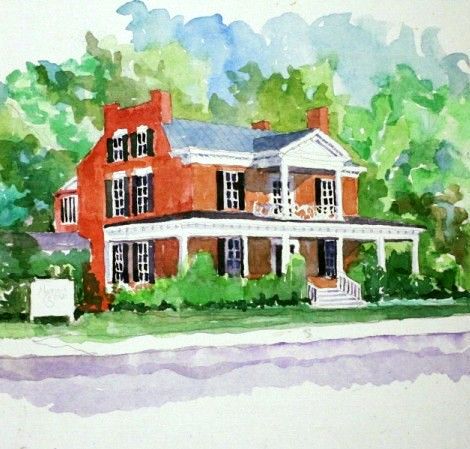 The History of the House

Construction of the magnificent Greek Revival home known as Mudd’s Grove got underway in 1859 and was completed in 1860 for John Hoffman, a local builder and real estate developer.

Using the soft salmon brick, common to the area, the house is built with masonry walls. In order to protect the brick’s fragile character, the exterior is painted. The first and second floors of the three-story dwelling were identical, having two rooms on the east and two on the west, separated by a central stair hall.

Each room has a nearly identical manteled fireplace leading to one of the distinctive twin chimneys in the gable parapets. The room arrangement, method of construction, fireplaces for heat and high ceilings for ventilation make this house a functional and practical design for the St. Louis climate.

Mudd’s Grove has been recognized as historically significant by the National Register of Historic Places. It was purchased by the Kirkwood Historical Society in 1992. Members of the Society have been lauded by the City of Kirkwood for their personal involvement in restoring the house to its original elegance. The Society operates it as a museum and resource center.

From 1865 until 1882 the mansion served as the residence of Henry T. and Sarah Elizabeth Mudd and their seven children. Mudd, a farmer, served as county auditor, member of the Town Board of Kirkwood and curator of the University of Missouri. During his tenure in the State Legislature, he helped frame the Missouri Constitution of 1875.

In 1902 the George D. and Virginia Dana family made significant changes to the house. The hearth room, which had been a free standing building, and the present catering kitchen, were enclosed as well as the upstairs porch. Dana, who owned the Charter Oak Stove Company, also added the gatehouse, a three-car garage and the front wrap-around porch. Other changes were made by subsequent owners.

Stay up to date

Open by reservation only.
Call 314-764-0809 to schedule Tour or Research Library Visit.

Private tours are by reservation only.

Call 314-764-0809 for more information and to schedule Tour or Research Library visit.